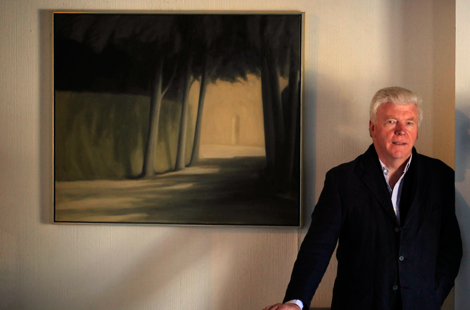 The true ‘subject’ of my work results from what I see – regardless of where and what that might be.

Location is important yet equally quite incidental. At one level I paint the real and visible world resulting from some intuitive inclination to observe some things and not others.
The outcome by process however, is aimed more toward metaphor than any mimetic description, the intention being that the provision of a  few clues connected to the subject will generate enquiry to that which is not visible, leading to engagement with that unseen dimension.
By memory and by time, literalness is diminished, and a new truth is created, almost as in a dream.
My intention is not to be illustrative of place or item so much as to seek to achieve a sense of the universal; a kind of symbolism triggering references for the viewer to the idea of having experienced such things in ones ‘minds eye’ if not perhaps by direct experience.
Since the late ‘90s one of the main ‘subjects’ of my work, has been the Boboli Gardens in Florence. The inherent natural and man made geometry at play in these gardens has provided a stage set around which “a very limited number of elements are structured and restructured to reveal intimate secrets like a diary of pictorial truths” as Professor Sasha Grishin, The Sir William Dobell Professor of Art History at the Australian National University has described.
The extensive body of my work on the Boboli, represents a commitment to explain the metaphysical experience of this garden and its example serves as an opportunity to explore other similar gardens in an effort to reveal inherent and universal mysteries of 'place'.

Born in 1949 in New Zealand, Peter studied at the Elam School of Fine Arts, University of Auckland, graduating in 1973. After completing teacher training at the Auckland Secondary Teachers College, and following a period teaching and studying in England and Spain, he commenced an art teaching career in Auckland that continued until 1987 when he moved to reside in Australia.
He lives in Leura in the Blue Mountains, NSW.
His first exhibition was in Auckland in 1974 and thereafter exhibited annually in New Zealand through his arrival to Australia. From the early 1990’s he has continued to exhibit annually in Australia and abroad.
In Australia, his work is represented by Phillip Bacon Galleries in Brisbane, Maunsell Wickes at Barry Stern Galleries in Sydney and Beaver Galleries in Canberra.
He has been a finalist on numerous occasions in national art awards, including the Fleurieu Biennale in 2002, 2004 and 2006.
In 1998 he was awarded the Tattersalls Landscape art award and the Kedumba Drawing award in 2004 and 2008.
Amongst others, his work is held in:


and numerous corporate and private collections in Australia and abroad including the Steve Martin Collection, Los Angeles, California.
In March April 2014, the survey exhibition, 'Mysterious Realities; the art of Peter Boggs' was held at Orange Regional Gallery NSW.